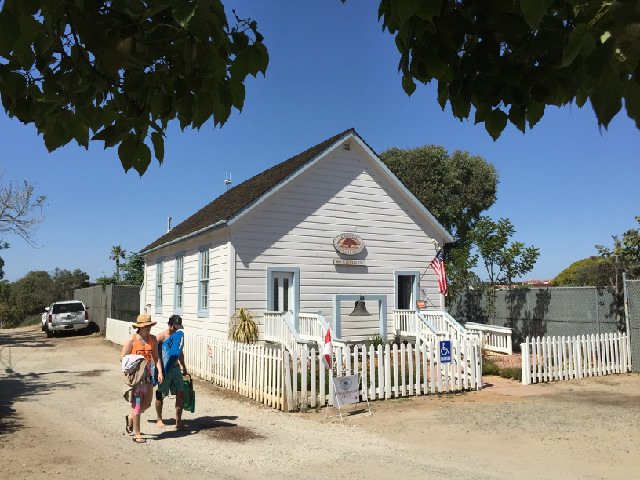 The Encinitas Historical Society is a non-profit organization dedicated to preserving and interpreting the City’s rich past though its research, library, programs, exhibits and publications.

Founded in the early 1980’s, the Society was initially concerned with saving the Old Schoolhouse from going the way of so many other historic buildings at a time that the developer’s wrecking ball seemed to reign supreme.

With the arrival of English immigrants, Edward and Jane Hammond and their seven children in 1883, the town’s population soared to twenty two.  Encinitas still lacked a school at that time, but since the $600 bond had already been approved, Edward Hammond and his son Ted immediately set about building a schoolhouse large enough to accommodate eight grades and one teacher.

As the town grew, and other schools opened up, the one-room building fell into disuse. By 1928 it had been relocated to Fourth and H Streets, where it served as a private residence for over half a century. But as the 1980’s dawned and real estate prices began to boom, the crumbling schoolhouse was slated for demolition.

Happily, after a sustained and passionate effort by the newly-formed Encinitas Historical Society, the Old Schoolhouse was successfully moved back to its original site where, hopefully, it will remain for many years to come: restored, preserved, and still the oldest building in town.

Today the Society is overseen by a dedicated Board and staff of volunteers (numbering amongst them, the great granddaughter of the Schoolhouse’s original builder); whose aim is to serve the community in honoring and preserving the Encinitas heritage.

Read Our Most Recent Newsletter Here!